Ever True: 150 Years of Giant Leaps at Purdue University 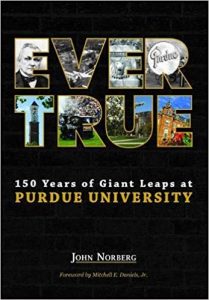 In 1869 the State of Indiana founded Purdue University as Indiana’s land-grant university dedicated to agriculture and engineering. Today, Purdue stands as one of the elite research and education institutions in the world. Its halls have been home to Nobel Prize- and World Food Prize-winning faculty, record-setting astronauts, laurelled humanists, researchers, and leaders of industry. Its thirteen colleges and schools span the sciences, liberal arts, management, and veterinary medicine, boasting more than 450,000 living alumni.

Ever True: Celebrating the First 150 Years of Purdue University by John Norberg captures the essence of this great university. In this volume, Norberg takes readers beyond the iconic redbrick walls of Purdue University’s West Lafayette campus to delve into the stories of the faculty, alumni, and leaders who make up this remarkable institution’s distinguished history. Written to commemorate Purdue University’s sesquicentennial celebrations, Ever True picks up where prior histories leave off, bringing the intricacies of historic tales to the forefront, updating the Purdue story to the present, and looking to the future.

A preview of Ever True is available for download here.
Available from the Purdue Press.

Reviews for Ever True

Advance Praise for Ever True
“Ever True   . . . the compelling story about the first 150 years of Purdue University. Written with concise historical perspective, and mixed with humor and wit, this quick read tells the stories of the people who have made Purdue into the outstanding University it is today. This book is laced with appreciation and respect, as only this accomplished ‘Hall of Fame’ author could do. Thank you, John Norberg!”
—Vanessa J. Castagna, Board of Trustees, 2013–Present, Purdue University

“Take a long, thrilling ride on the Boilermaker Special with chronicler John Norberg. With wit and humor, Norberg captures the spirit, the adventure, the stories, and the achievements of one of America’s oldest and most admired institutions of higher education. You will feel that you are living the legends that inspire Boilermakers everywhere. You will meet the people who have made a lasting impact on a university that is both respectful of tradition and welcoming of new ideas. The world’s oldest Big Bass Drum is summoning you to spend some time with this delightful history, which marches through 150 years of famous competitions on the gridiron to inspira­tion from Nobel Laureates.”
— France A. Córdova, President Emerita, Purdue University

“Among its stories of alumni and faculty giants, Ever True illuminates the role students have played in shaping the University, and the book reads as a familiar and telling account of what students prize. It grounds the reader in what truly exemplifies being a Boilermaker — that the bold spirit present in many members of the Purdue community today is nothing new, but rather to be expected and cherished.”
— Samuel Eschker, Student Body President, 2017–2018, Purdue University

“John Norberg’s Ever True: 150 Years of Giant Leaps at Purdue University is an engaging, inspiring, and beautifully written history of one of America’s most distinguished public universities. It tells the story of Purdue from its humble origins through to its emergence as a preeminent research university. Purdue’s relentless commitment to excellence is captured in the personalities and stories of its leaders, its faculty, its students, and its remarkably devoted alumni. Norberg artfully captures the excitement and progress of the time period after 2000 that I have personally experienced at Purdue. This wonderful book is a must-read for all who love this great University.”
— Martin C. Jischke, President Emeritus, Purdue University

“With captivating storytelling, drama, and wit, John Norberg has compiled the most comprehensive history of Purdue University to date. His account brings history to life by focusing on the people who shaped Purdue. Written as a series of vignettes, each chapter illuminates a major event or tradition, always with the human element at the forefront. Through diaries, interviews, and other rare sources, Norberg offers a variety of perspectives that define the identity and character of the institution via the personalities involved. Even the most die-hard Purdue fan will find something new to learn and savor in Ever True.”
— Sammie L. Morris, University Archivist, Purdue University

“Ever True is a very good read! Anyone who approaches this book believing the old myth that history is dull and uninteresting will be pleasantly surprised. This book is a gift of great value to the Purdue community — now and as long as there is a Purdue University.”
— Betty M. Nelson, Dean of Students Emerita, Purdue University

“Norberg skillfully walks readers through time in this fascinating, comprehensive history of Purdue. His relatable descriptions contain something for everyone to learn. We as students should be proud to be part of this rich history, and Ever True provides us with a sense of what it means to be a Boilermaker: a hardworking, humble individual who has the potential to make an enormous impact. I am ever grateful to the Boilermakers in this book who have made Purdue what it is today. As a trustee, I feel even more compelled after reading Ever True to ensure that Purdue’s future is as fruitful as its 150-year history. Hail Purdue.”
— Daniel Romary, Student Trustee, 2017–2019, Purdue University Jerry Ross grew up part of a humble, proud and loving family in rural Indiana and became the most launched astronaut in history. As one of NASA’s senior most astronauts he played a key role in building the International Space Station and is the astronaut with the second most spacewalks. His career spanned the entire Space Shuttle program.

This memoir tells of his dream to become an astronaut, his humor, calm determination and faith. This book is available in hard back and paperback and also is available as an e-book with links to Purdue University’s NASA archives, which include papers, material and videos from Ross. Available from the Purdue Press and Amazon.

The books tells the history of flight from the Wright Brothers through today using the stories of Purdue graduates.

These include Cliff Turpin, who helped the Wright Brothers redesign their engine and controls in 1908-1909 and then become part of the Wright Exhibition Team demonstrating flight to the nation. It includes the stories of many Indiana natives such as Ralph Johnson, among the nation’s earliest aeronautical engineers and a pilot for United Airlines in the days when the job responsibilities including serving dinner to the passengers; Frederick Martin, who commanded the first flight around the world in 1924; Malcolm Ross who commanded balloon flights up to the stratosphere before the Mercury space program; and much more.

Also part of the book are the stories of 22 astronauts who have graduated from Purdue, including the first and last men on the moon, Neil Armstrong and Gene Cernan.

The book tells Indiana’s amazing role in the history of flight and describes the feeling of sitting on the wing of a Wright Flyer and launching in a space shuttle. It also tells how Purdue became an international leader in flight and space.

And it began on America’s college campuses. Veterans returned home to the GI Bill, and many became the first in their families go to college. They returned home to develop the technologies made possible by the war and to send men to the moon. They returned with still-fresh memories of the Depression, but also with unbridled optimism.

The faith and the determination of those veterans and their classmates – and the quiet revolution they started – are captured in this book. The setting is Purdue University, on the banks of the Wabash River in north-central Indiana. The mosaic of memories is in their own words. Available from Amazon.

Celebrating 125 years of Purdue Bands, this beautifully-illustrated book (which includes a musical CD) traces the history of Purdue University’s Department of Bands from its humble origins as a drum unit for the student army training corps to the 2010 appearance of the “All-American” Marching Band as leader of the Macy’s Thanksgiving Day Parade in New York, seen by over fifty million television viewers.

It follows the lives of the organization’s members and legendary directors, such as Paul Spotts Emrick and Al G. Wright, and highlights some of the band’s iconic features, such as the “World’s Largest Drum” and its legendary twirlers; the Golden Girl; the Girl in Black; the Silver Twins; and the Goldusters.

This was John’s first book chronicling the history of the Purdue bands. Purdue’s “All-American” Marching Band is known as one of the largest in the country, even though Purdue does not have a School of Music. It boasts the “World’s Largest Drum” and a famed twirling line featuring the Purdue Golden Girl. Available at Amazon.

Perhaps Hansen Chein, chairman of Taiwan’s largest broadcasting corporation and a 1975 Purdue graduate, said it best: Purdue has an international heart. It has one of the largest enrollments of international students. For years, many have come from Tiawan, Korea and Hong Kong, economic “tigers” of the Pacific Rim. John Norberg tells the story of that relationship and the people who came here and went on to build new economies and governments. Available at Amazon.

This book captures the story of this leading school of business. Unpublished.

Details the journey of the Purdue Mechanical Engineering department. Where it’s been and where’s it’s going.

Ever True: 150 Years of Gian Leaps at Purdue University

Thank you Phil for the amazing work you do. Imaging agent illuminates lung cancer tumors https://stories.purdue.edu/imaging-agent-illuminates-lung-cancer-tumors/