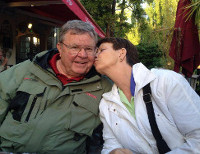 John Norberg is an Indiana Journalism Hall of Fame writer, author, humorist, and chronicler of the human condition living in Lafayette, Indiana. He is the husband of Jeanne and the father of three adult children. He spoils five grandchildren, three granddogs, and one great granddog.

He is retired from Purdue University, where he was the speechwriter for the university presidents and Director of Communications for Development. He is also retired from the Lafayette (IN) Journal and Courier.

He began a newspaper humor column in 1971, which ran for 44 years. He wrote more than 2,000 humor and human interest columns for the Journal and Courier.

During his time at J&C, he was also known for award-winning news and feature stories, mostly about residents in north-central Indiana area. He has received more than 50 state and national reporting awards.

A nationally respected award-winning speechwriter and in-demand public speaker, Norberg is the author of eight published books, including one he wrote with astronaut Jerry Ross, the world’s most frequent flier into space with seven shuttle launches. Spacewalker: My Journey in Space and Faith as NASA’s Record-Setting Frequent Flyer details Ross’ journey from a loving family in rural Indiana to the role he played in establishing the International Space Station.

Norberg’s most recent book is Ever True: 150 Years of Giant Leaps at Purdue University, published by Purdue Press in May of 2019 as part of the university’s sesquicentennial celebration. The book tells the history of Purdue through the stories of people.

He is now working on a new book detailing the stories of people in Purdue’s military history, which reaches back to its founding as a Land-Grant university.

Born April 12, 1948, in Oak Park, Illinois, Norberg grew up on the north and northwest sides of Chicago in Skokie and Mount Prospect. He graduated from DePauw University in Greencastle, Ind., in 1970 and settled in the state. He started his newspaper career at the Brazil Daily Times where he became editor before signing on at the Journal and Courier in 1972. He left the newspaper business in 2000 to become a Purdue speechwriter but continued to write his weekly humor column for J&C. Some of his columns are posted at this website.

Norberg has written articles for various national publications, including the Saturday Evening Post, USA Today, the Christian Science Monitor, and Time magazine. He has been interviewed on the CBS News Sunday Morning Show, NPR’s Big Picture Science, and many newspapers, radio, and TV news shows. He was honored with the prestigious Purdue University Special Boilermaker Award for contributions to University.

Besides his family and writing, Norberg is fond of old movies, sports (Cubs, White Sox, Bears, Bulls, Black Hawks, and Purdue Boilermakers), singing in the car, travel, and ice cream, not necessarily order.

Thank you Phil for the amazing work you do. Imaging agent illuminates lung cancer tumors https://stories.purdue.edu/imaging-agent-illuminates-lung-cancer-tumors/